Discover some recipes that can be made with this product

Number of pieces in the package:12

Typical Tuscan pasta, similar to tagliatelle, but 1.5-cm wide.
Produced with Tuscan durum wheat semolina, processed using artisan methods, bronze-drawn and dried at a low temperature.
They distinguish themselves for the presence of the Wheat Germ, the heart of the grain of wheat, rich in flavour and nourishing active ingredients. The germ is normally removed when the grain is milled in order to improve flour conservation. The pastificio Morelli has used artisanal techniques to restore it to the flour, because it processes it immediately, when still fresh. After years of using Wheat germ, the Antico Pastificio Morelli has managed to create pasta with its extraordinary, unmistakable flavour. An intense wheat aroma is released during cooking and the water turns slightly green, because of the presence of the wheat germ.
With its delicious wheat flavour, this pasta is perfect for rustling up a quick dish, served with traditional meat-based sauces or plain with a little oil.

Request information Back to product category 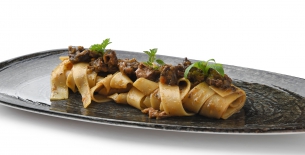